Hope on the Horizon for IBD Patients / A Patient Matters Feature 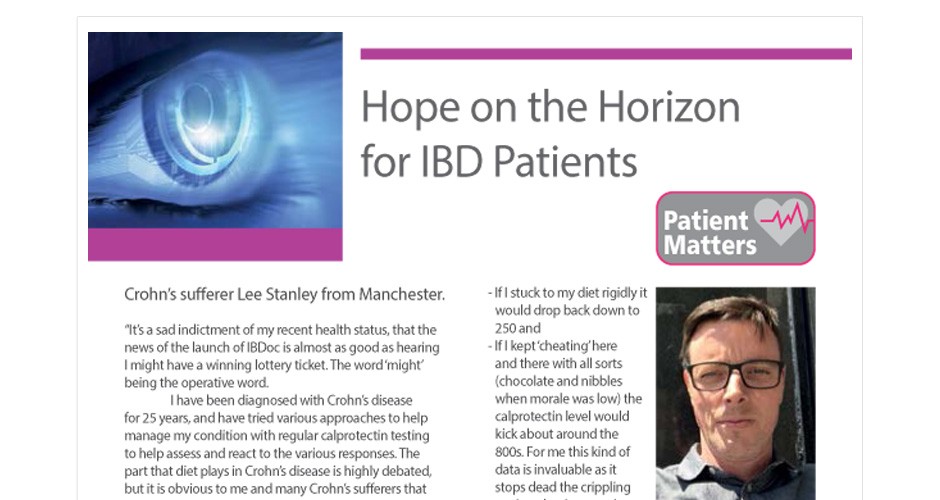 Crohn’s sufferer Lee Stanley from Manchester writes about his experience of living with Crohn’s Disease for 25 years. Why he feels regular calprotectin testing is important, and the benefits that the introduction of the IBDoc calprotectin self-testing system will bring.

“It’s a sad indictment of my recent health status, that the news of the launch of IBDoc is almost as good as hearing I might have a winning lottery ticket. The word ‘might’ being the operative word. I have been diagnosed with Crohn’s disease for 25 years, and have tried various approaches to help manage my condition with regular calprotectin testing to help assess and react to the various responses. The part that diet plays in Crohn’s disease is highly debated, but it is obvious to me and many Crohn’s sufferers that certain foods trigger flare ups. The whys and wherefores of such a statement is not to debate here, but ask any Crohn’s sufferer if they can eat what they want, and they will all give you a list of things that they just cannot tolerate. The lack of progression in addressing this area is fundamentally found in the fact that they will all give you different answers from different food groups.

I was first introduced to calprotectin testing when I started on a very basic LOFFLEX (LOwFat/Fibre Limited EXclusion) diet of rice, chicken and carrots. Every time a food was introduced I would have to report back to the dietician after six weeks. The calprotectin samples were taken once a month, but between the lab turn-around times and the administrative processing between lab, clinician and my GP, the results would take about a month – this was useful information but was just too long to achieve sensible conclusions about the impact of the dietary changes. After about two years and a lot of research I negotiated privately with a local clinic to carry out my calprotectin tests, and was able to get that turn-around time down to forty eight hours and doing it weekly.

This taught me some fundamental things about managing my Crohn’s through diet:

– If I introduced a food over a week that created inflammation in my gut (for whatever reason) the calprotectin would shoot up to over 1000 and the results were often surprising: for some reason almonds and spinach sent the calprotectin through the roof!

– If I stuck to my diet rigidly it would drop back down to 250 and – If I kept ‘cheating’ here and there with all sorts (chocolate and nibbles when morale was low) the calprotectin level would kick about around the 800s.

For me this kind of data is invaluable as it stops dead the crippling anxiety that is a massive part of having IBD. …but at £70 a test this was just not sustainable.

Although the dietary approach has helped me manage my Crohn’s, my diet is very limited, so I have recently received anti-MAP (Mycobacterium Avium Paratuberculosis) therapy at Guys hospital in London. A few weeks after the optimum doses for anti-MAP were achieved I again did a calprotectin. Stunningly it was below 50 and it is through deep understanding of my individual calprotectin results due to length of monitoring that I am confident anti-MAP is working and hopefully the results will be seen at the next MRI.

In the meantime, I have been on rice, chicken and carrots for so long my body is reacting to anything new I put in it. The hope is now a re-introduction of food groups back in to my diet with regular calprotectin monitoring, but the cost for private testing via my clinic is just not feasible.

So to hear about IBDoc, it does indeed feel like I might have won the lottery – but I can’t get to the ticket as there are no clinics using IBDoc in my area. Why can’t I just regularly access, use and upload all the data myself? Diabetics can access their insulin levels instantly – imagine if diabetics had to wait forty eight hours to test their own blood sugar? The calprotectin result is not information that needs breaking gently to someone but instant access by the patient would not only revolutionise the speed and intensity of the research collated but also significantly improve lives in the management of IBD” 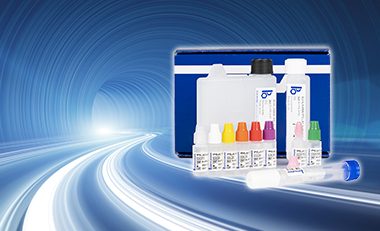